This is not the end yet, I just wanted to say that it has been a fun term taking three of Peter Hogdins’ classes. Although, I am not sure how I will do after the exams. It has been a blast.
Some loose ends. I’ve been bombarded with questions by people within Canadian Studies asking me if I “live” in the Canadian Studies Lounge and “why are you always there?” The answer is no. Here’s my reason, I did not expect the 12th floor of Dunton Tower to have wireless Internet access around the 2nd or 3rd week of September. I usually hang out at the tunnels or the library, if there is space. It’s ridiculous finding a place to sit. Also, the readings for Peter’s 4th year classes are in the lounge so I can read them through. Another thing is that I can never live without the Internet.
The funny thing is that I made it 5 days to going to the lounge. As usual, I only have class 4 days a week because I don’t have class on Wednesdays. All I can say it was good timing that I saw someone and showed him my comics.

To people from CDNS2210, CDNS4200 and CDNS4400, I gotta say that you all are great and I will probably miss you since I won’t be seeing anyone in the Winter term.
Even though, I ended up getting hurt on occasion for Thursday’s class.

Since it is this time of year when music artists come out with their greatest hits album.
Here it is, U218 Singles. I got it on iTunes and I can’t stop listening to it on my iPod. The Deluxe version on iTunes includes live tracks from the 2005 Milan concert. 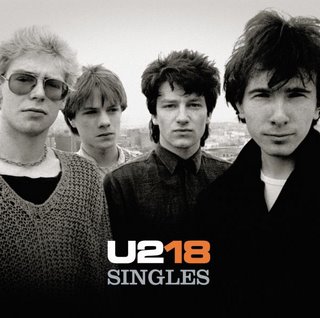