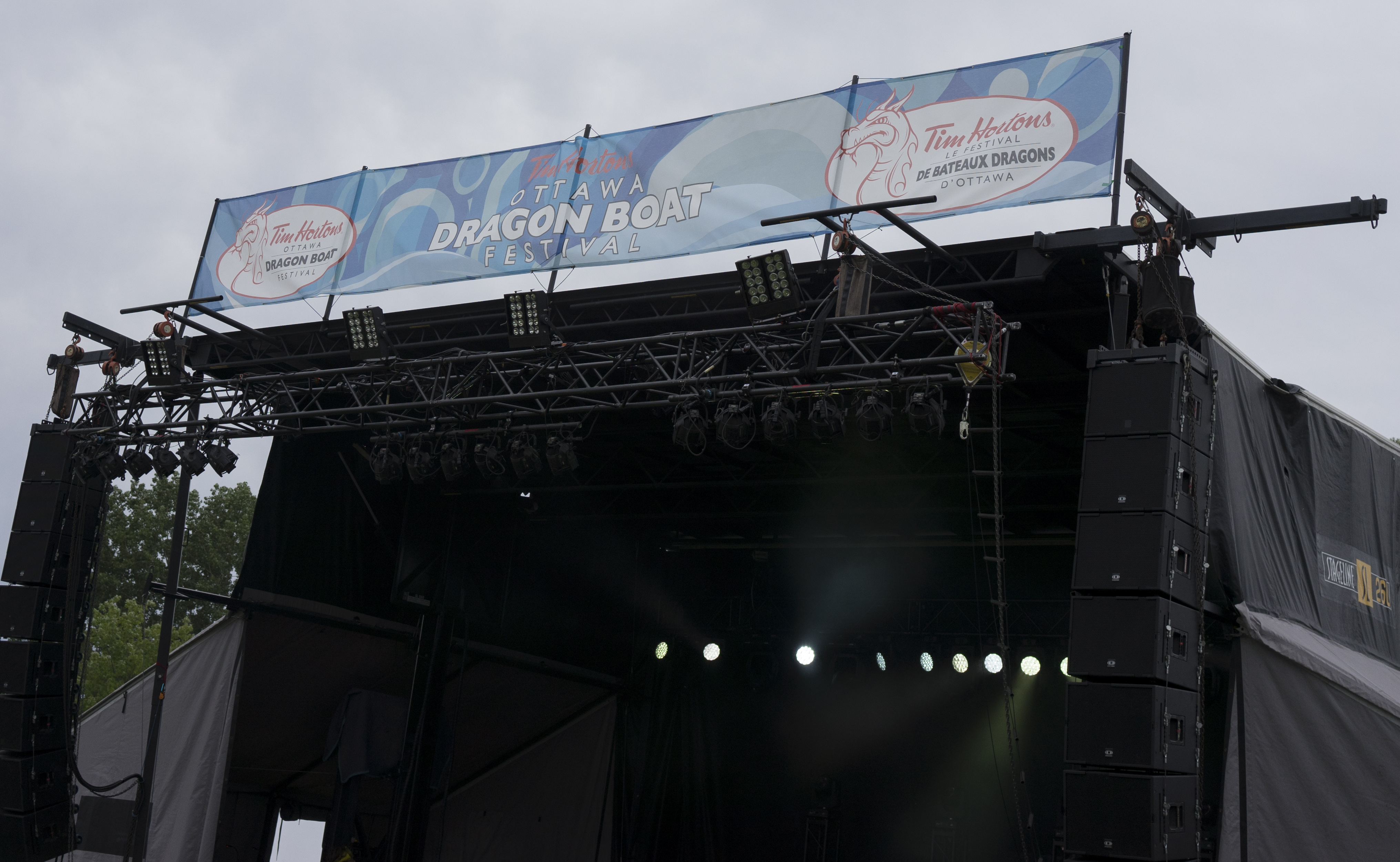 It was another exciting time at the Tim Hortons Ottawa Dragon Boat Festival. The lineup for Saturday’s concert was amazing to say the least. It consisted of Ottawa’s The Acorn, who I have been seeing a lot recently as Rolf Klausener and company released the new album, Vieux Loup. The album is also on the 2015 Polaris Music Prize long list.

Following The Acorn was Jeremy Fisher, who now lives in Ottawa. He had a good set and brought a lot of fun humour which the crowd loved. After Fisher was done, next was The Rural Alberta Advantage and they didn’t disappoint. They were rocking each songs and the crowd enjoyed it.

Last, but not least was Dan Mangan + Blacksmith, who I last saw back in February for NAC Presents. Mangan and his band returned to Ottawa for the Dragon Boat Festival. Also, his band mates were doing double duty as two of the members played as Peregrine Falls and they performed at Ottawa Jazz Festival prior to going to Dragon Boat Festival.

Dan Mangan + Blacksmith did not disappoint as they played tracks from their album, Club Meds and previous songs from Oh Fortune and Nice, Nice, Very Nice. The encore set had some favourites from Robots, Basket and a few others.

You can check out the photos over at Flickr by clicking HERE. END_OF_DOCUMENT_TOKEN_TO_BE_REPLACED

After missing out on last year, it’s great to be back for Friday night’s opening ceremony of the Tim Hortons Ottawa Dragon Boat Festival. The opening ceremony began with the bagpipers marching and leading the dragon boaters to the main tent. Following the speeches was the lion dance.

Prior to the lion dance, I had a chance to check out Kalle Mattson as they were one of the opening act for Hey Rosetta, the headliner for the Friday show. It was definitely a fine Friday night to be out anywhere in Ottawa.
I can’t wait to check out The Acorn, The Rural Alberta Advantage and Dan Mangan + Blacksmith at Ottawa Dragon Boat Festival for Saturday evening.

As usual, you can check the photos over at Flickr by clicking HERE. 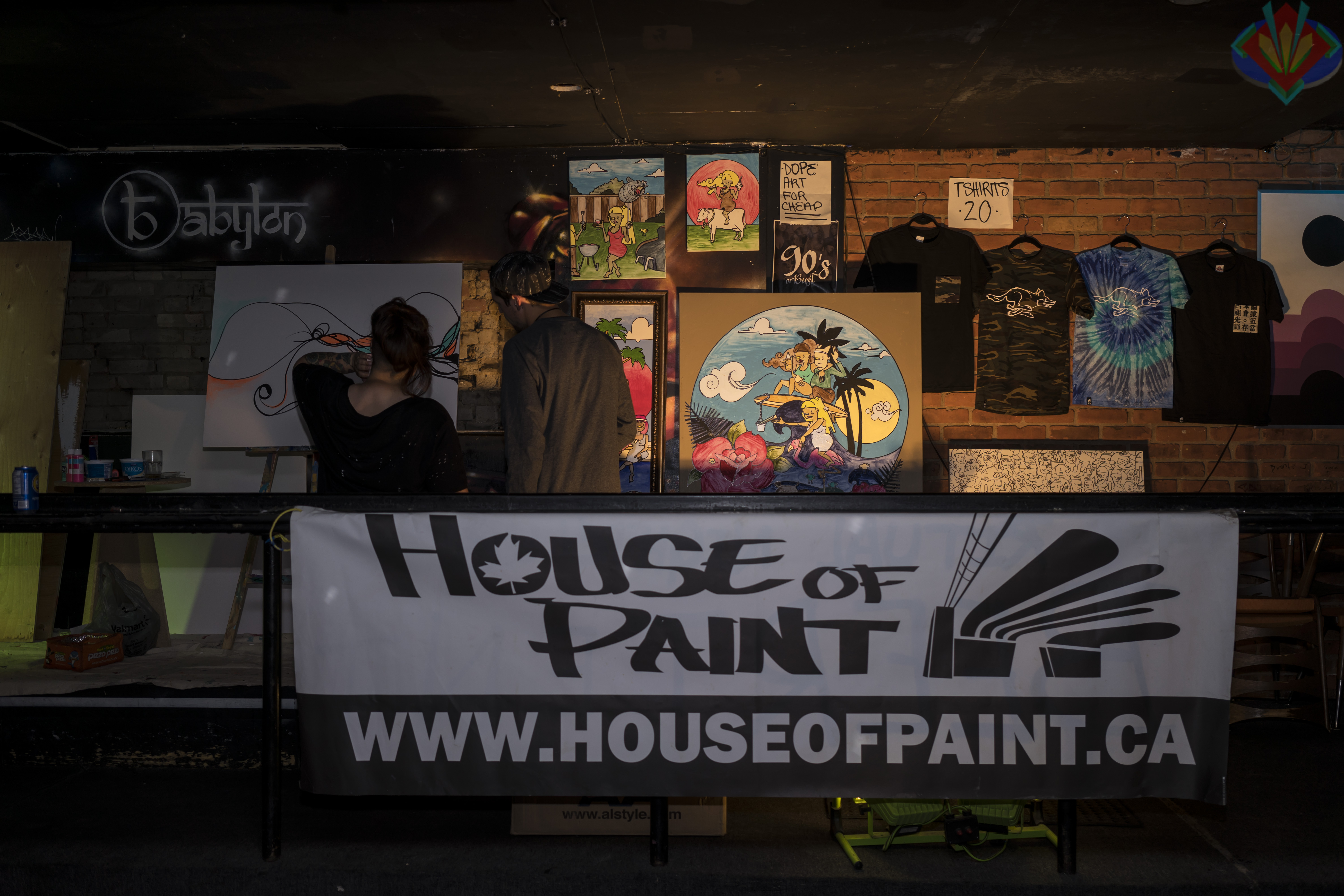 There were a lot of events happening on Thursday night from Ottawa Jazz Festival to to several concerts like Murder Murder and Scary Bear Soundtrack at Rainbow Bistro. The Summer festival is full swing in Ottawa and so many things to do.

I decided to go to the Tim Hortons Ottawa Dragon Boat Festival to check out Mounties as I haven’t had a chance to see them live. Mounties consists of Hawksley Workman, Ryan Dahle and Steve Bays. They were an enjoyable band to check out as their stage presence was funny and engaging. Between in each songs, they kept bringing up funny banter and the crowds loved it. What a way to start the concert series at Ottawa Dragon Boat Festival. Unfortunately, I missed out on Jim Bryson and Yukon Blonde as I had to head over to Babylon Nightclub.

Fresh – June Edition
I went over to Babylon Nightclub for Fresh, it’s an event by DJ 2 Creamz of The Mix. There were performances by Missing Linx, Phoenix Pagliacci, Yusso & Junia-T. There was live art and display from Vincent B, Cinema, Mique Michelle, Alexandre Aimée, Robbie Lariviere, Jay Leblanc and Bradford Photo. As well, there were beat showcase by Bix and CircaBeatz and music by 2 Creamz himself and The Kid Gorgeous.
Lastly, it’s nice to see House of Paint as one of the supporters/sponsors for the event and keeping Hip-Hop in Ottawa strong.
Due to the time, I didn’t get a chance to check out Yusso and a few others but was able to take a bunch of photos.

It was good night to check out a lot of events in Ottawa. This weekend continues to be a fun time as June finishes up. 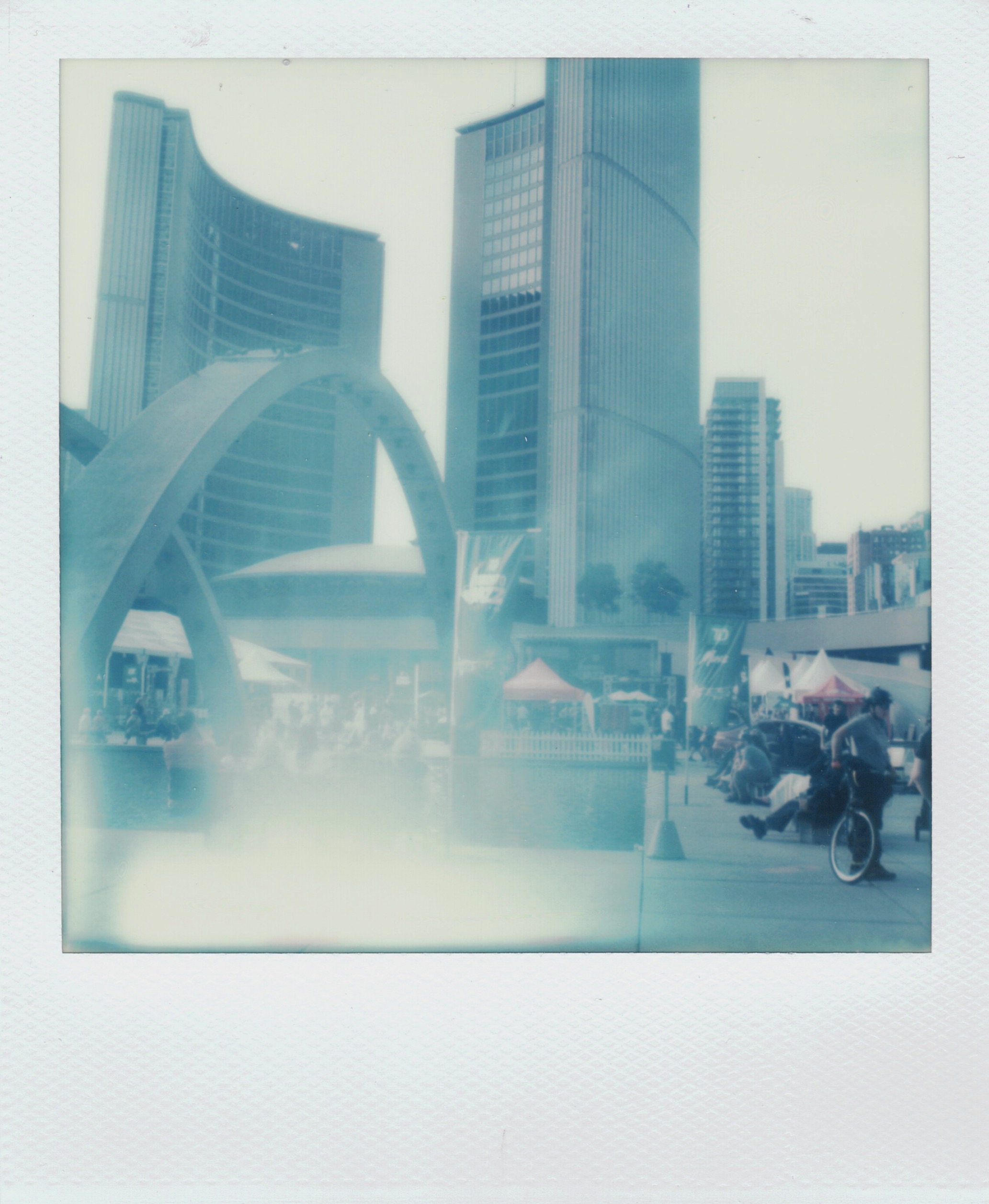 For the third or technically second year, I have been bringing the Polaroid SX-70 camera to shoot some fun instant photos in Toronto. The first year was using a Fujifilm Instax.
Don’t worry, I was still shooting digital with the Sony a7 and the iPhone 6, there was a lot of juggling to do.

I know people will still call it Polaroids as I’ve been using The Impossible Project films to use it. It’s just fun to shoot analog photos and bringing a sense of originality. It’s more like a dying art but younger generations are using the Fujifilm Instax Mini. It’s the competitor to Impossible and is more stable with their instant photos.
I didn’t shoot Polaroids during live shows as I was not sure about using flash and possibly getting told by the security or the NXNE volunteers. It was better to use it to shoot with people outside of the shows.

During the CBC Radio 3 Unofficial Fan Picnic, I took a bunch or Polaroids and gave them away to people. There was no chance in scanning them to the Impossible iOS app. I was able to keep some that I took. On the first day, I gave away two round frames to friends and was able to scan it from the app.

Lastly, You can the photos from below. I’m making sure these are posted first to the blog and then onto various social media sites.
As the saying goes, film is not dead. END_OF_DOCUMENT_TOKEN_TO_BE_REPLACED 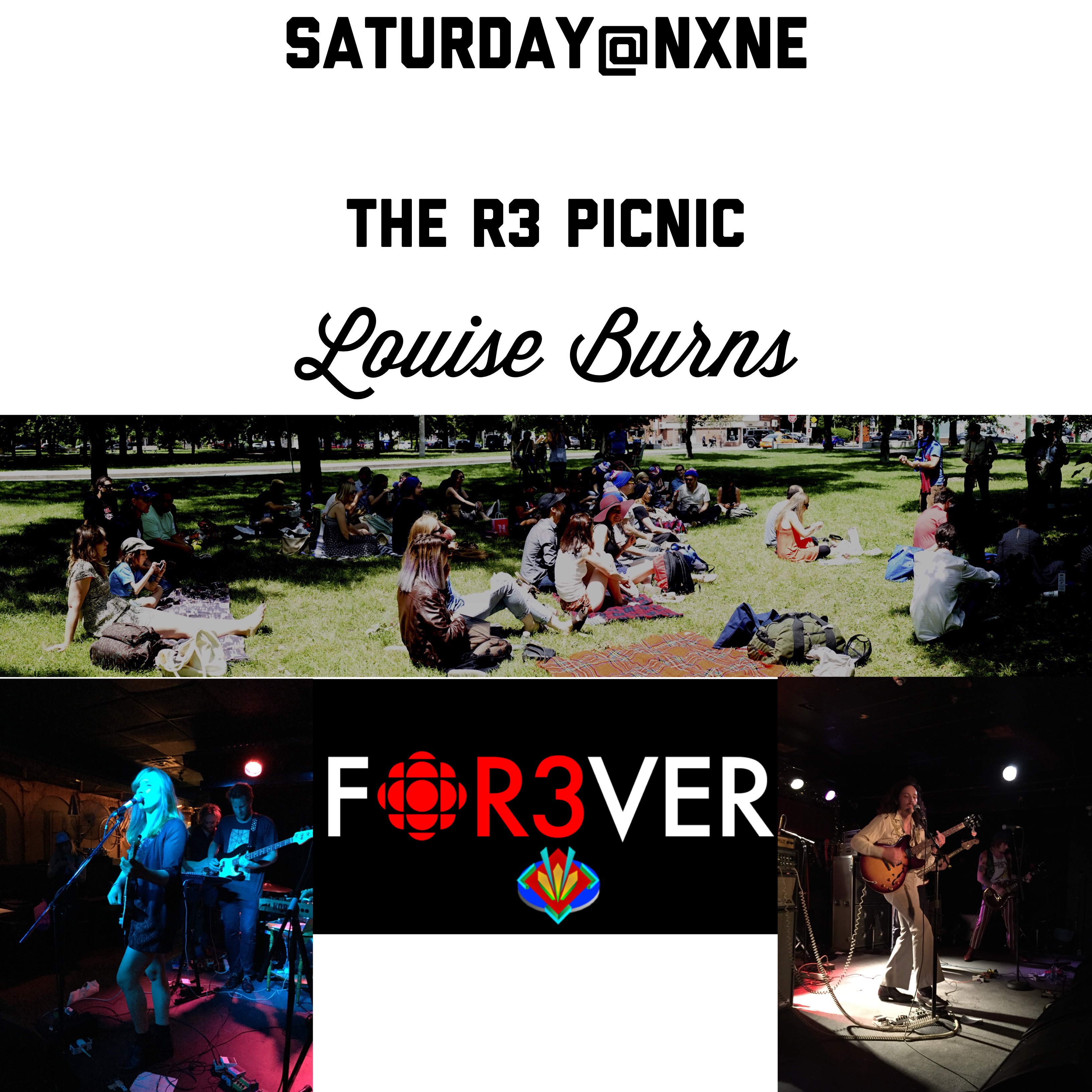 As I’m taking the train back to Ottawa on Sunday morning, let’s recap what acts I check out on Saturday throughout NXNE. To start things off, the first event wasn’t NXNE related but had artists playing at NXNE. It was the 5th annual CBC Radio 3 Unofficial Fan Picnic and it was held at Trinity-Bellwoods Park. The lineup for the picnic were Murder Murder, Kathryn Calder, David Vertesi and The Acorn.

It was a fun event as it was a thrill to see other CBC Radio 3 fans from all walks of the corner and enjoy live acoustic music at a park.

Louise Burns at Handlebar
Throughout my time, I have enjoyed listening to Louise Burns but I had never taken photos during her performance (last time was at NAC as she opened for Hannah Georgas. I always enjoy her sultry dreamy sounds from her music. It was Burns’ second performance at NXNE as I missed her at Lee’s Palace from Wednesday night. The one at Handlebar made it up as I didn’t have plans on who to check out.
Burns played her usual songs from the album, The Midnight Mass and she played two tracks from her upcoming third album. It’s exciting to hear her coming out.
It was a surprise to see N2DS2W as they’re supporters and fans of Louise Burns and she also hosted on CBC Radio 3. It sure lifted my spirits up. END_OF_DOCUMENT_TOKEN_TO_BE_REPLACED

Friday was the start of the weekend and there were a lot of events happening during NXNE. The first event I went wasn’t part of NXNE but it was an important for myself because it was the Polaris Music Prize Long List panel at ACTRA RACS. Steve Jordan, the founder of Polaris was moderating and the panelists were Slava Pastuk (Noisey Canada), Nicole Villeneuve (AUX), Tabassum Siddiqui (Freelance) and Lana Gay (CBC Music).

The panel talked about the criteria of the music prize and who they voted for in the current list as well as mentioning past lists. Jordan brought up about having the longest list since there’s always debate and discussion on which albums got snubbed or left off from the ballot. It was a great event and always a treat to see the people behind Polaris.

CBCMusic.ca Showcase at NXNE Hub
As Friday was a jam packed event at NXNE in Toronto, the first event was the CBCMusic.ca presents: Music at the NXNE Hub. It was a free show at NXNE Hub. The hosts for the event were Grant Lawrence, Tom Power (of CBC Radio 2 Morning) and Jonny Harris (Murdoch Mysteries).
The performers consisted of the 2015 Searchlight winner, Orange O’Clock. Other performers on the list were Jane’s Party, Ben Caplan, Iceage (from Copenhagen, Denmark) and Toronto’s catl.
I was able to check out Orange O’Clock and Jane’s Party as I decided to head off to other venues. I did return for catl, which they played an awesome set.

END_OF_DOCUMENT_TOKEN_TO_BE_REPLACED 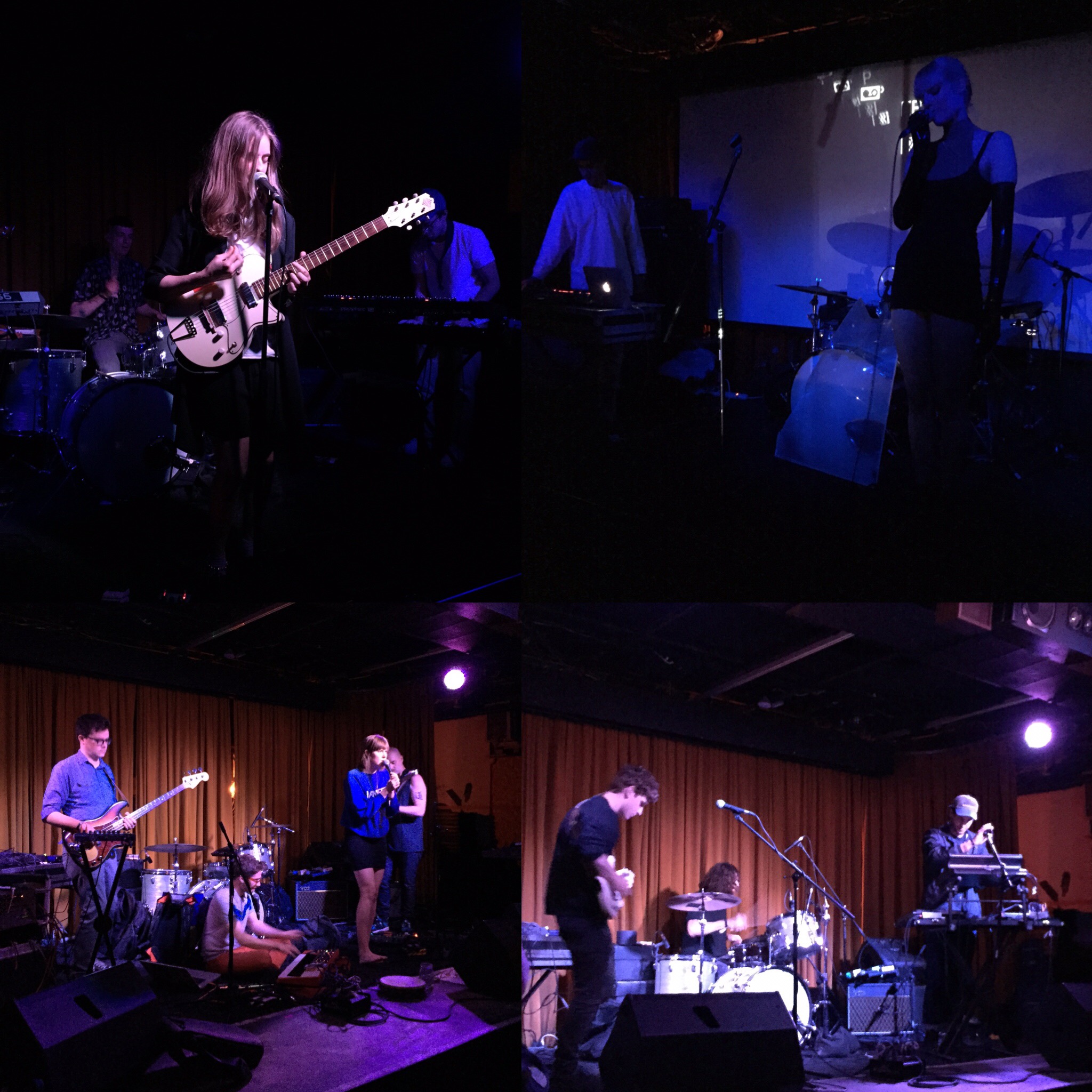 It’s that time of month where Canadian music fans anticipate the Polaris Music Prize long list. There’s always complaints about certain artists or bands not making it to the list and then when it get whittled down to the top 10, there’s more madness and fury. It’s all in the fun and excitement to finding out who made it and which obscure album got on the list.
Don’t forget that it’s compiled and determined by a jury of broadcasters, journalists, bloggers and programmers who choose their albums based on artistic merit. The winning album this year gets the $50,000.

Here’s the list of the 40 nominated albums for the 2015 edition of Polaris Music Prize;