Here are a photo from June 15. That’s Viv, Ziad, me and Mike. Enjoy. Finally, my profile pic updated. 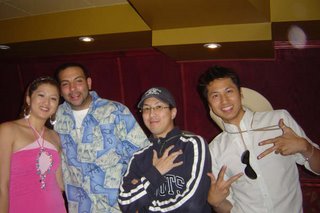 Well, I have been watching some FIFA World Cup Football 2006 lately. Who to cheer for? Not sure, I really hope England gets through. Looks like France won’t.

Spider-Man revealing his identity in Civil War #2. I hope Marvel Comics makes it good. There seems to be a good and bad point to Spidey revealing himself.

Well, another comic talk this week. The comic I like to blog about is Wonder Woman #1. DC relaunched it this week and so far, it has been “wonderful.” The writer on the helm is former OC writer, Allan Heinberg. The art is drawn by Terry Dodson.

Well, here’s the response I had with Allan Heinberg from MySpace. I gotta say, thank you George Strumboloupolos for plugging MySpace like crazy. I have been using MySpace for awhile, but I never realized that celebrities are using it. Here’s my response.
“I got a chance to flip thru it and I gotta say that it’s “wonderful.” 🙂
Oh yeah, I bought 2 copies. One for myself and another for a friend who doesn’t know he’s getting it. 🙂
I kind of regret not getting Young Avengers due to being skeptical, but gave it to my friend. My friend totally loved Young Avengers, plus he’s an OC fan as well.
I read Young Avengers before giving it to my friend. I gotta say that it’s great. At least, I hope Marvel puts it out on oversized hardcover, then I will be happy instead.
The sad part is that my friend is going off to Boston for law school in August. So, I will be picking up the slack and getting your comic work. 😀
Looking forward to Young Avengers Season 2 next year.

Last thing, I wanted to get the Adam Kubert variant, but it could be expensive because the owner prices it at over $10 or $20 Canadian. “

Here’s Allan Heinberg’s response:
Dude, you’re too nice to me. (I love it.) 🙂

And I’m hoping for that oversized hardcover, myself. I’ll let you know via MySpace if it happens.

Last point, I am soooooo sad that CBC News: The Hour with George Strumboloupolos had it’s “season finale.” I also “wonder” if George picked up Wonder Woman #1.

Oh boy, I missed The Hour on Wednesday. For some reason, I had to record Gameshow Marathon. Hey, it’s the Price Is Right and I grew up watching it.
On Tuesday night, I went to the Canadian Museum of Civlization for CBC’s Foreign Correspondent Forum. It was great and informative. I just hope I am not shown in the crowd for tonight’s airing on CBC Newsworld. I was able to get Peter Mansbridge’s signature. I wanted to ask him about George Strumbo, but I couldn’t think of a question linking to George. I only asked him if he uses an iPod and he does. LOL
I missed Wednesday’s edition of The Hour and George talked to Adrienne Arsenault as part of CBC’s Foreign Correspondents Week. Damn, I missed it.

Comic picks for me are Runaways #16, Ultimate Fantastic Four #30 and Superman/Batman #26(got 2 copies, I hope my friend is not reading this blog)
Plus, I picked up Son of #6 for my friend as well.
What’s special about Superman/Batman #26? Well, it’s a tribute to a boy who passed away in 2005. It was Jeph Loeb’s son, Sam. He had a 3 year battle with cancer. I know I have been talking to an employee at The Comic Book Shoppe and he told he’s not really a big fan of Jeph Loeb(for non comic fans, he did Teen Wolf starring Michael J. Fox) because his storytelling is awful. I never knew that Jeph Loeb is an awful writer. I kept that thought for so long with the notion that he is a bad writer. His son wrote a story featuring Robin and Superboy, but he was not able to finish it up because of his illness from cancer. What I liked about that issue is that it features 26 people on the comic. 11 writers and 15 artists on it to help finish Sam Loeb’s story. It was a nice and fitting story. I won’t criticize or be negative on it, I bought for what it’s worth, the notion of reading for enjoyment.
I hope my friend will understand it when I give him that issue. Don’t worry about the money and etc. Just keep it. No matter what, I am still getting you some comics as a surprise before you leave to Beantown, I mean B-Town, I mean BosSox Nation, I totally mean Boston.